The cost of any casting increases in proportion to the restrictiveness of the specifications for dimensional investment casting tolerances, chemistry, or nondestructive testing.

Tolerances may be affected by a number of variables. Wax or plastic temperature, injection pressure, die temperature, mold or shell composition, back up sand, firing temperature, rate of cooling, position of the part on the “tree”, and heat treat temperature all bear directly on tolerances required in the investment casting industry. The amount of tolerance required to cover each process step is dependent, basically, on the size and shape of the casting and will vary from foundry to foundry. This is because one foundry may specialize in thin walled, highly sophisticated castings, another in mass production requirements, and yet another in high integrity aerospace or aircraft applications.

Flatness and straightness are so closely related that confusion may arise unless the foundry and the purchaser reach definite agreement prior to production. Flatness tolerance is the total deviation permitted from a plane and consists of the distance between two parallel planes between which the entire surface so toleranced must lie. In measuring, the parallel planes must be the minimum distance apart.

The degree of flatness exhibited in an investment casting is almost always determined by the amount of volumetric shrinkage that the wax and metal undergo during cooling. This shrinkage is usually in the center of the mass and is referred to as “dish”. This dish can be controlled by specialized techniques, but will always be present to some extent. General flatness tolerances cannot be quoted as they vary with configuration and alloy used.

The tolerance covering the straightness of an axis is the diameter or width within which the axis must lie.

It is obvious from this that to correctly measure axial straightness of either a shaft, bar or plate, the tolerance zone (within which the axis or axial plane lies) must be measured.

Straightness may be a real problem with certain types of castings. A relatively thin, short part may bend while a long heavy part may not. Experience tells the foundry that a given design may bend, but experience cannot say to what extent. As a rough guide, it may be said that a constant section will have an axial bow of 0.005” per inch. Ribs and gussets will inhibit warpage and will also hinder the mechanical straightening.

Casting of parts, which have parallel prongs supported only at one end, present a very specialized type of problem and should be discussed fully with the Foundry prior to production.

Yoke castings also present a very specialized type of problem and should be discussed fully with the Foundry prior to production.

Since point X is the thickest section, it is the ideal point to gate. It is also the area where the greatest volumetric shrinkage will occur. Dimension Y, however, will be restrained by the rigid mass of refractory. The result is that parallelism is difficult to maintain and will be 0.010” inch per inch of L, but can be improved by control techniques and sizing. This condition will also affect any through holes usually found in yokes. When specified, such holes should carry considerable finish stock if they are to be finished truly concentric of line reamed.

Roundness or “out of round”

“Out of round” is defined as the radial difference between a true circle and a given circumference. It is the total indicator reading when the part is rotated 360° or it can be calculated by taking half the difference between the maximum and minimum condition. The latter technique is usually preferred since it takes less time.

Two cylindrical surfaces sharing a common point or axis as their center are concentric. Any dimensional difference in the location of one center with respect to the other is the extent of eccentricity.

However, in a shaft or tube, straightness has a very real influence on concentricity.

Diameters A and B may be true circles, but it obvious that the out of straightness condition has affected concentricity.

The roundness of a cast hole is affected by the mass of surrounding metal. If an uneven mass is adjacent, the hole will be pulled out of round. If the surrounding metal is symmetrical, holes up to ½” diameter can be held to +/- 0.003” when checked with a plug gage. Larger holes may be affected by interior shrinkage or pulling, and the foundry should be consulted.

The longer the hole or the more mass of the section around it, the more pronounced the effect. Some shrinkage concavity will be present to some extent in all castings. The openings at top and bottom of the hole will be approximately the same dimension while the center will be a larger diameter. Through holes, which require clearance (this can be checked using a plug-type gage) can be held to fairly close tolerances of the larger diameter in the center is ignored. If, however, the sidewalls of the hole are used as bearing surfaces, a simple reaming operation will size the cast opening.

The low figure shows the effect of shrinkage on a hole diameter when a heavier section is in the proximity of the hole itself. Note that the diameter is distorted due to additional mass shrinkage of the heavier section. The figure is a graphic illustration of the distortion that will be present to a greater or lesser degree in every casting when a heavier mass affects shrinkage.

Since curved holes are formed by either soluble wax or preformed ceramic cores, the normal tolerance tends to be doubled. A factor of two times must be applied to the tolerance on all dimensions controlling a feature. Since such holes cannot be sized, a diameter tolerance of +/- 0.005” per inch also applies.

These should always be given as wide a tolerance as possible. They are difficult to control and can only be checked approximately by radius gages, or at a premium by an optical comparator. 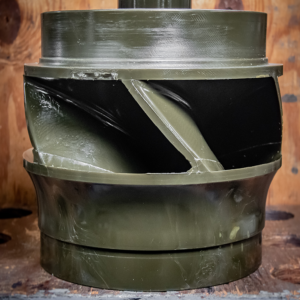 As a general rule normal linear tolerances on investment castings are as follows: Up to 1” +/- .010”, for each additional inch up to ten inches +/- .003” per inch. For dimensions greater than ten inches allow +/- .005” per inch. Secondary operations such as straightening and sizing will produce closer dimensional tolerancing.

An exception to the linear tolerance exists on wall thickness where the tolerance must be a minimum of +/- .020”.