Nickel is added to Stainless steels to stabilize the austenite phase, which provides toughness and ductility. When added to steels, it provides hardness and toughness. Nickel is also the base metal for many casting Alloys resistant to corrosion and high temperature oxidation. Element 28; Symbol: Ni.

A trade name for a series of hard white cast irons containing about 4% Ni and 2% Cr.

Nitrogen is added to Stainless steels to stabilize austenite and to reduce the sensitivity to sensitization. If added in excess of the solubility limit, it can cause gas porosity. It combines with several elements to form nitrides. Depending on the application, the nitrides may be helpful (increase strength, especially at high temperatures) or harmful (decrease machinability and toughness). Element 7; Symbol: N.

Graphite or carbon in nodular form, characteristically in malleable and nodular iron.

Refers to Alloys in which the predominant metal or solvent is not iron.

In metals and Alloys, the formation of metal-oxygen compounds or oxides. These oxides may be scale as formed during the casting process or during heat treatment. They may also be non-metallic inclusions on casting surfaces or within the casting, later to be uncovered by machining.

The changing of a chemically active surface of a metal to a much less reactive state. In Stainless steels, the formation of a chromium/iron spinel surface layer; if this film is removed, such as by machining, it re-forms naturally on exposure to air. It may be de-stabilized by certain corrosives, leading to pitting or crevice corrosion.

A metastable lamellar aggregate of ferrite and cementite (iron carbide) resulting from the transformation of austenite at temperatures above the bainite range.

Pressure Equipment Directive 97/23/EC. The European directive covers pressure equipment and assemblies with a maximum allowable pressure PS greater than 0.5 bar. Pressure equipment means vessels, piping, safety accessories, and pressure accessories, Assemblies means several pieces of pressure equipment assembled to form an integrated, functional whole. The Commission’s proposal was submitted to the Council of Ministers on July 15, 1993 and was adopted by the European parliament and the Council on May 29, 1997. It came into force on November 29, 1999 but compliance with its requirements will be optional until May 29, 2002.

A symbol denoting the negative logarithm of the concentration of the hydrogen ion in gram-atoms per liter, used in expressing both acidity and alkalinity; ph = log 1 / H- per liter. pH is an important factor in corrosion control and must be considered when selecting Alloys for a particular service.

Phosphorus is considered an undesirable element in most Alloys as it produces pronounced segregation on solidification resulting in embrittlement. Element 15; Symbol: P.

Removing surface oxides from metals by chemical or electrochemical reaction.

An arc cutting process that severs metals by melting a localized area with heat from a constricted arc and removing the molten metal with a high-velocity jet of hot, ionized gas issuing from the plasma torch.

The application of heat to an assembly after welding.

The temperature of the base metal in the volume surrounding the point of welding immediately before welding is started.

The totality of features and characteristics of a product or service that bear on its ability to satisfy a given need (fitness-for-use concept of quality). Degree of excellence of a product or service. Often determined subjectively by comparison against an ideal standard or against similar products or services available from other sources.

In ferrous Alloys, hardening by austenitizing and then cooling at a rate such that a substantial amount of austenite transforms to martensite.

For Stainless steels and corrosion resisting Ni-base Alloys, rapid cooling to avoid precipitation of unwanted phases such as carbides and intermetallics. For steels, rapid cooling for hardening; normally achieved by immersion of the object to be hardened in water, oil, or solutions of salt or organic compounds in water. 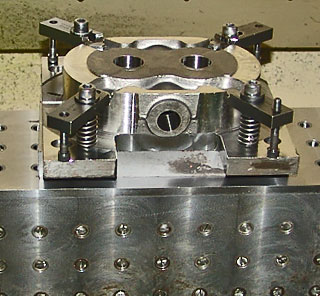